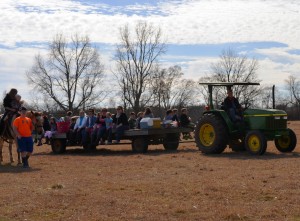 Chickens, rabbits, turkeys, geese, goats, sheep, and a horse named Ol’ Yeller were many of the highlights enjoyed by first through sixth graders on Emmanuel’s Animal Farm trip last week.

A total of 27 children and 10 adults enjoyed a day on Martha Petrus’ 600-acre farm full of open pastures, animals and fruit trees.

Beautiful weather added to an enjoyable day. When we arrived, everyone loaded up on a trailer and Ms. Martha pulled us out to the open field by her house for the kids to run, play games and ride her horse, Ol’ Yeller.

Some of the adults helped ready bamboo sticks for hot dog and marshmallow roasting later, while Martha started the pit fire.

One group of children and adults enjoyed the fresh air and open fields while Martha took another group on a tour of the farm.

Petting dogs and holding dwarf rabbits was first on the tour stop. Geese roamed the grounds throughout our time on the farm, but immediately knew when snack time was about to begin. Each of the children was given a small container of corn to feed the geese and ducks near the pond.

After animal snack time was over Martha took everyone to see her “flipping” pigeon. She threw him into the air and he immediately hit the ground rolling over several times. Both children and adults were in awe.

The next stop was collecting eggs at the chicken coop. On average, Martha’s chickens lay up to 35 dozen eggs a week. After returning the eggs to their nests, the children walked around the pond to see newborn sheep. One lamb had been born just that morning, while two others had been born the day before.

We ended the tour at Martha’s fruit trees where children picked fresh oranges and satsumas.

After roasting hot dogs and marshmallows in the fire everyone packed up for one last stop in town at Little Cakes (with Big Attitude).

Everyone enjoyed winding down the day with ice cream or specialty cupcakes before returning to Emmanuel.